Should You Buy Assets That Have Recently Performed Well?

Ben Carlson recently updated the asset allocation on his site, which shows the biggest winners and losers every year by asset class going back to 2005. The quilt is color coded which helps you identify a very important lesson within the pattern; the asset class or classes that lead the pack for a series of years tend to lag in subsequent years (and vice versa). Click for larger image:

There are a ton of examples we could use over the last 9 years, but look at emerging markets (green) and cash (dark blue) from 2005 to 2007. Emerging markets were the darling sector as we entered the new millennium (along with REITs and commodities). Most don't remember, but U.S. stocks lagged considerably during this period. People I worked with at the time talked about how they had 100% of their 401k in foreign funds because they crushed the U.S. markets every year.

As a side note; U.S. stocks significantly outperformed the rest of the world in the 1990's (another example slightly further back in history of an asset class leading the pack and then trailing in subsequent years).

Cash and bonds were considered trash during the 2005 to 2007 run because so many people were crushing it in real estate and foreign stocks. Then in 2008 cash and bonds had an incredible year with 2% and 5% returns respectively. Why? Everything else was completely destroyed making a 2% return look spectacular that year.

Over the past three years we have experienced an echo of what occurred in the late 1990's. The United States has become the darling market of the world as everything else has lagged or declined. U.S. stocks, bonds, real estate and even the U.S. dollar are soaring in unison. Money is flooding into American assets from around the world (and within the U.S.).

Commodities have been steadily declining since mid 2011 and over the past 6 months it has turned into a complete rout. Cash has once again become trash and completely forgotten. Foreign currencies have experienced massive declines against the U.S. dollar and global stocks (other than China) peaked in July of 2014 and have been quietly declining for 6 months.

Unlike 2012 to mid 2014 when it felt like everything was rising, markets are beginning to fragment. The only assets still soaring are U.S. everything, Chinese stocks and foreign government bonds (yields are hitting record lows around the world).

The world markets are pricing in a deflationary recession (see commodities falling due to demand pressure and government bonds rising as investors rush to deflationary safety). The markets forgot to tell this to U.S. stocks which have broken away from the rest of the world like a runaway supernova. US stocks are now more expensive relative to foreign stocks than they were at the peak in 2000: 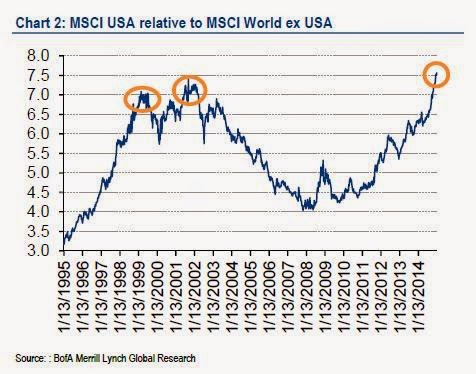 World stocks tracked alongside the U.S. markets during the 2008 decline and the subsequent rise until early 2012 when the U.S. broke away from the pack. 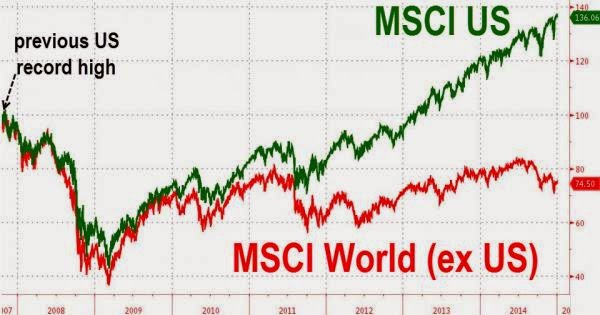 The divergence became more clear in 2014 as global markets topped and began to fall while the U.S. continued to soar higher. 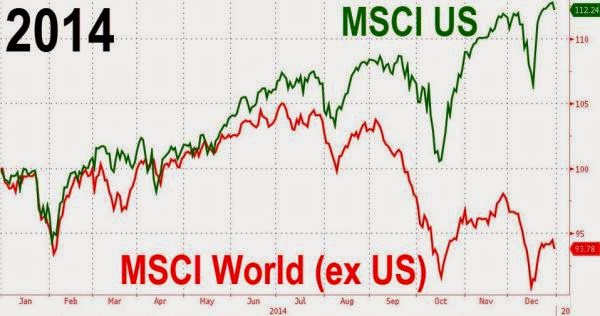 The same divergence occurred with commodities but it has been even more drastic (see the massive separation in performance from mid 2011 to present day below):

Here is the divergence zoomed in over the past 5 years: 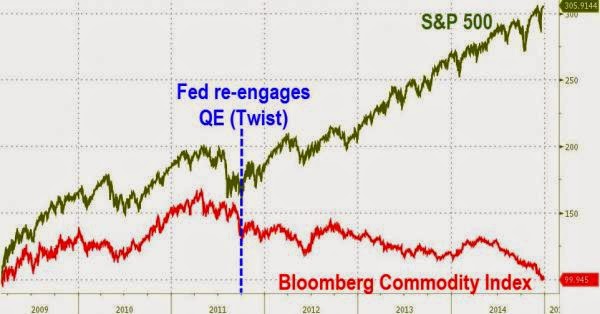 Here is the consensus view from financial analysts and economists entering 2015:

The United States will carry the world out of the deflationary recession it is falling into and U.S. stocks will lead world markets upward. The U.S. dollar rises alongside real estate and bond yields.

1. World economies barely avoid a global recession in 2015 due to a larger than expected QE program from the ECB and a more dovish Federal Reserve, which keep the speculative risk on juices flowing for one more year. The markets that have lagged (commodities and international assets) catch up to U.S. assets (similar to 2003 - 2007) for a final blow off top.

2. The United States follows the world downward into a global deflationary recession and U.S. stocks catch down to all other asset classes that have already or are beginning to price this in. Risk off. Cash is king. (similar to 2008).

I believe the second scenario is more likely, but is important to see is that either way U.S. stocks will be a relative under performer. Perhaps it is time for a new color to move toward the top of the quilt in 2015 and 2016. Time will tell which new hero emerges. 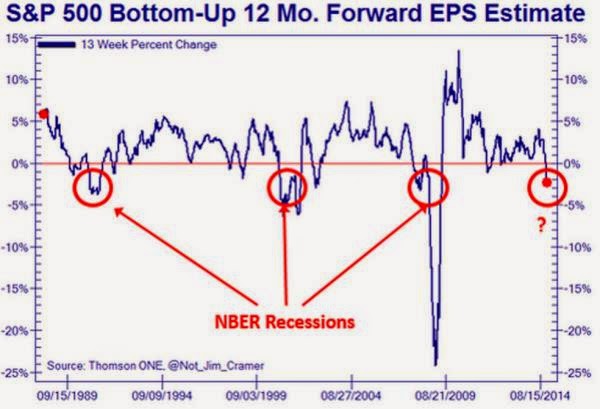