Forget the 1%, the top 0.1% controlled over 22% of the wealth in the United States through 2012. This percentage is certainly far higher today as stocks, real estate and bonds have appreciated significantly over the past two years. While books have been written on why this has occurred it can be summed up in far less words. The monetary policies beginning with the Greenspan Fed in the 1980's all the way through to the Yellen Fed at present have been focused exclusively on pushing up asset prices at any cost. 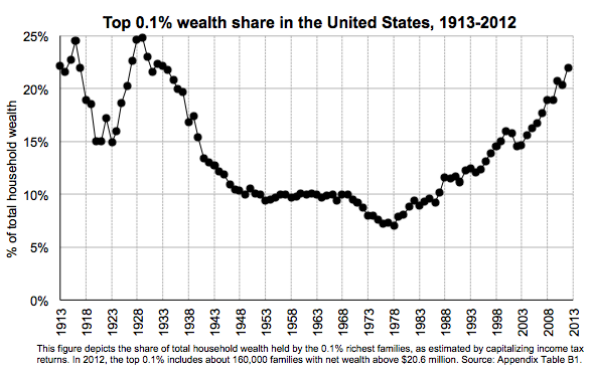 Stocks, bonds and real estate have surged and those that entered the boom loaded with assets (the rich) have experienced massive asset appreciation while those that entered the boom without assets (the poor and middle class) have seen their real wages stagnate or decline. This has made it extremely difficult to save and accumulate financial assets because they have essentially been running on a treadmill to survive. It should be crystal clear for anyone that has paid attention over the past three decades that the current central bank policies help the rich at the expense of the real economy.

Those not in the 0.1% (myself included) can take solace in the fact that financial crashes hurt the rich the most, and a crash is exactly what is coming. We are closing in on the previous high seen in 1929 when the 0.1% controlled a staggering 25% of the nation's wealth. It was quickly taken away for most of them as stocks, bonds and real estate prices simultaneously experienced the greatest crash in history. The rich discovered asset prices cannot appreciate forever without real growth in the underlying economy. History will repeat again, as it always does.