The McKinsey Global Institute released an excellent study this week on the growth of global debt since the financial crisis began in late 2007. Total debt has grown by $57 trillion since Q4 of 2007, led by a $25 trillion surge in government debt. 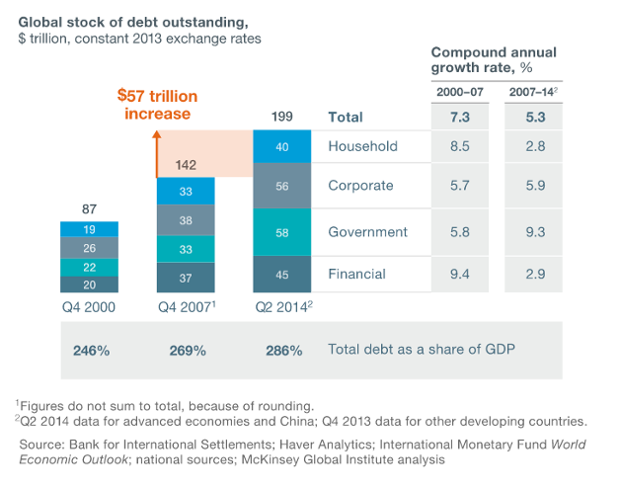 Every country has a different debt story so it is impossible to explain or even predict how the next crisis will unfold using a simple, blanket explanation. For example, Japan's record setting total debt to GDP (over 400% - see chart below) is due in large part to their ridiculous government debt levels (over 250% of GDP). China on the other hand has seen their total debt grow from $7 trillion in late 2007 to over $28 trillion today due in large part to real estate and shadow banking debt.

The chart below tracks the change in total debt by country in relation to their GDP (total size of their economy) since 2007 on the vertical axis and tracks the total debt to GDP on the horizontal axis. 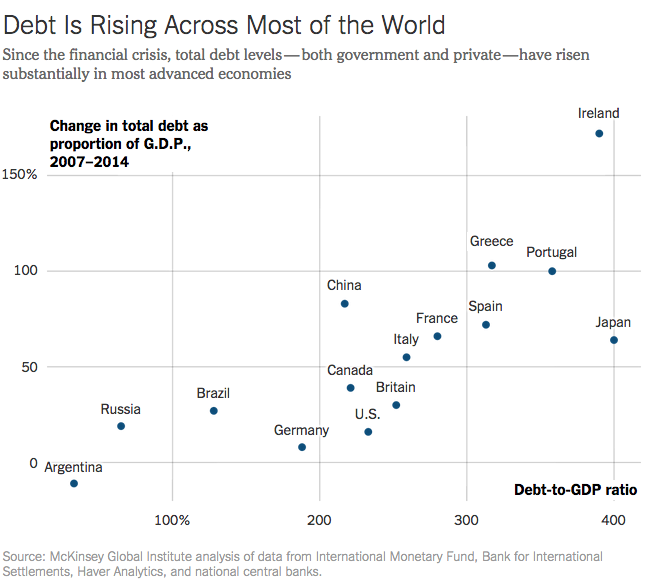 The global debt explosion began in 1971 when the dollar was removed from the gold standard and currencies had the ability to free float around the world. This opened up the potential for banks to provide an unlimited amount of credit and simultaneously allowed governments to issue an unlimited amount of debt. The chart below shows the key moment in 1971 and does not include financial (bank) debt: 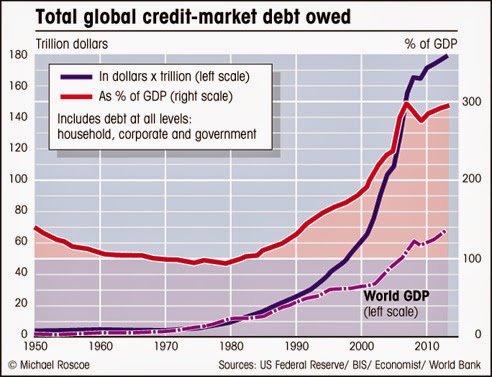 Political leaders made a decision back in 1971 that it would be up to the markets to determine when countries had issued too much debt or printed too much currency (reflected by rising interest rates as investors sold bonds). These leaders were told the markets are a perfectly efficient weighing machine, meaning investors would pull back when there was too much borrowing by a particular nation or if inflation were too high. Like the gold system, they believed this would auto-correct debtor countries to begin paying down their debts and allow more responsible countries to borrow more.

We know now, as we can see in the charts above, the market's auto-correct function has been turned off for about 35 years. The bond vigilantes did not arrive, and investors (up until now) have only wanted debt more as countries became more and more irresponsible. 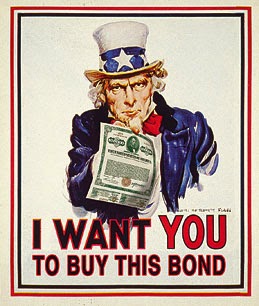 The global markets valued U.S. subprime bonds at 100% par value with interest rates at record low levels entering the summer of 2007. Just a few trading weeks later subprime bonds were valued at 90% (or more) less than par value and most could not be purchased at any interest rate. Did something fundamentally change with their value over those few weeks? No, confidence behind the paper assets just disappeared overnight.

This the problem with politicians or central bankers using the financial markets as a gauge to when they should be issuing more debt or printing more money. By focusing on the blue skies in the rear view mirror they cannot see the storm approaching 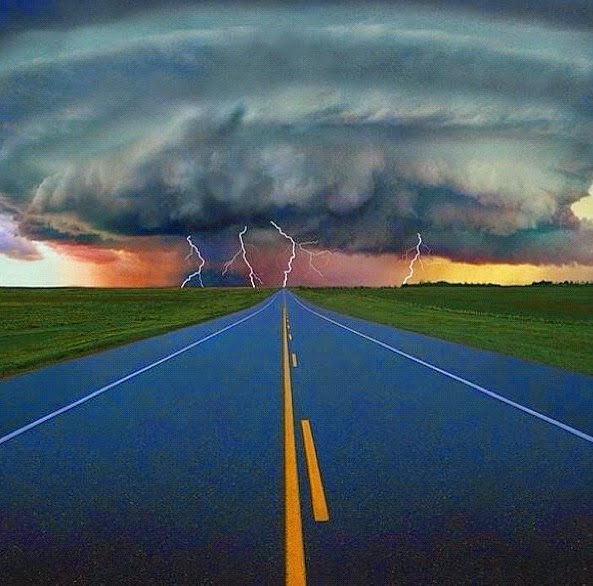 .
Governments look at the interest rates on their debt sitting at all time record lows around the world and believe they are doing everything just fine. Through the widespread adoption of Keynesian economics throughout the world, most political leaders look at rates today and conclude the problem is not enough debt is being issued.

The same applies for central banks, which use inflation as their gauge. They see that after 7 years of zero percent interest and endless QE money printing programs inflation has not yet appeared. Their programs have caused asset bubbles in the financial markets, but the money has not made its way into the real economy (which would reflect in the consumer price index). Their conclusion is that more QE is needed to try and force feed inflation through the financial system into the real economy. This is why we have crisis-level monetary policies in place at a time when the global economy is not in a crisis. Meanwhile, malinvestments are now everywhere as the insane monetary policies have led businesses, individuals and governments to take on an extraordinary amount of additional debt since 2007.

The next crisis will involve the peak and subsequent collapse in government debt around the world. Government bonds do not have to move like a U.S. subprime mortgage bond did in 2007-2008 (go from 100% value to 0% value) in order to spark a crisis. If a 10 year yield moves from 30 basis points in Germany to a more historical normalized rate of 3.0%, investors who purchased that paper at 0.30% will be massively underwater on the investment. As we discussed last weekend, the majority of those purchases are occurring with massive leverage so the unwind will be catastrophic.

This does not factor in the hundreds of trillions of dollars of insurance contracts created in the derivatives market now betting on interest rates staying low forever. Just as in 2007, investors believe their government bond purchase at 30 basis points is safe because they have an insurance policy on the bond which covers losses after a certain threshold. These insurance contracts are what allow the massive leverage to take place because their computer models show protection against any scenario that should occur. 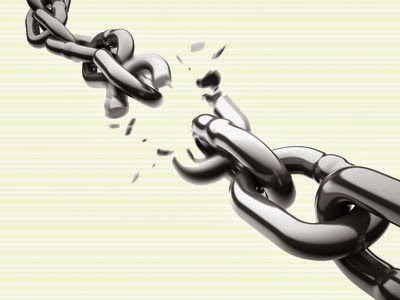 The problem, as it was in 2008, is counter-party risk. The insurance company (hedge fund, bank, etc.) may not have the capital to step in and cover the losses when they arrive. Just as no major bank had the value of real estate falling more than 5% in 2006, no one has government bonds falling rapidly in price at any point this decade.

While AIG almost destroyed the financial system with their insurance bets on subprime mortgages in the early 2000's, there are probably 10 AIG's that exist throughout the financial system today backing the broader bond market against losses. Most of these companies will not have the capital in place when the crisis arrives and the derivatives implosion will begin. How do we know this? There are no regulations in place to track these insurance contracts or the capital that is supposed to be in place behind them to cover losses. The derivatives market exists in the shadows. A one quadrillion market based solely on the trust in the paper contracts.

When the day of reckoning arrives, everyone will be just as shocked as they were during the last financial crisis. Only this time it is far easier to see.

One morning we will wake up and have reached the peak in confidence surrounding the global debt supernova. When the leveraging gears begin to slow down, then stop, then begin deleveraging the other direction the panic moment will arrive when investors discover central banks are powerless to stop the collapse. They will learn that hundreds of trillions of dollars in derivatives based on counter-party trust alone is not a healthy structure for a financial system.

How quickly can the bond market turn?

In mid 2014 oil was trading over $100 and by the end of the year it was in the $40's. Almost no investment trading or energy firm in the world had a collapse of that speed and magnitude built into their models. The result has been chaos in the energy sector. 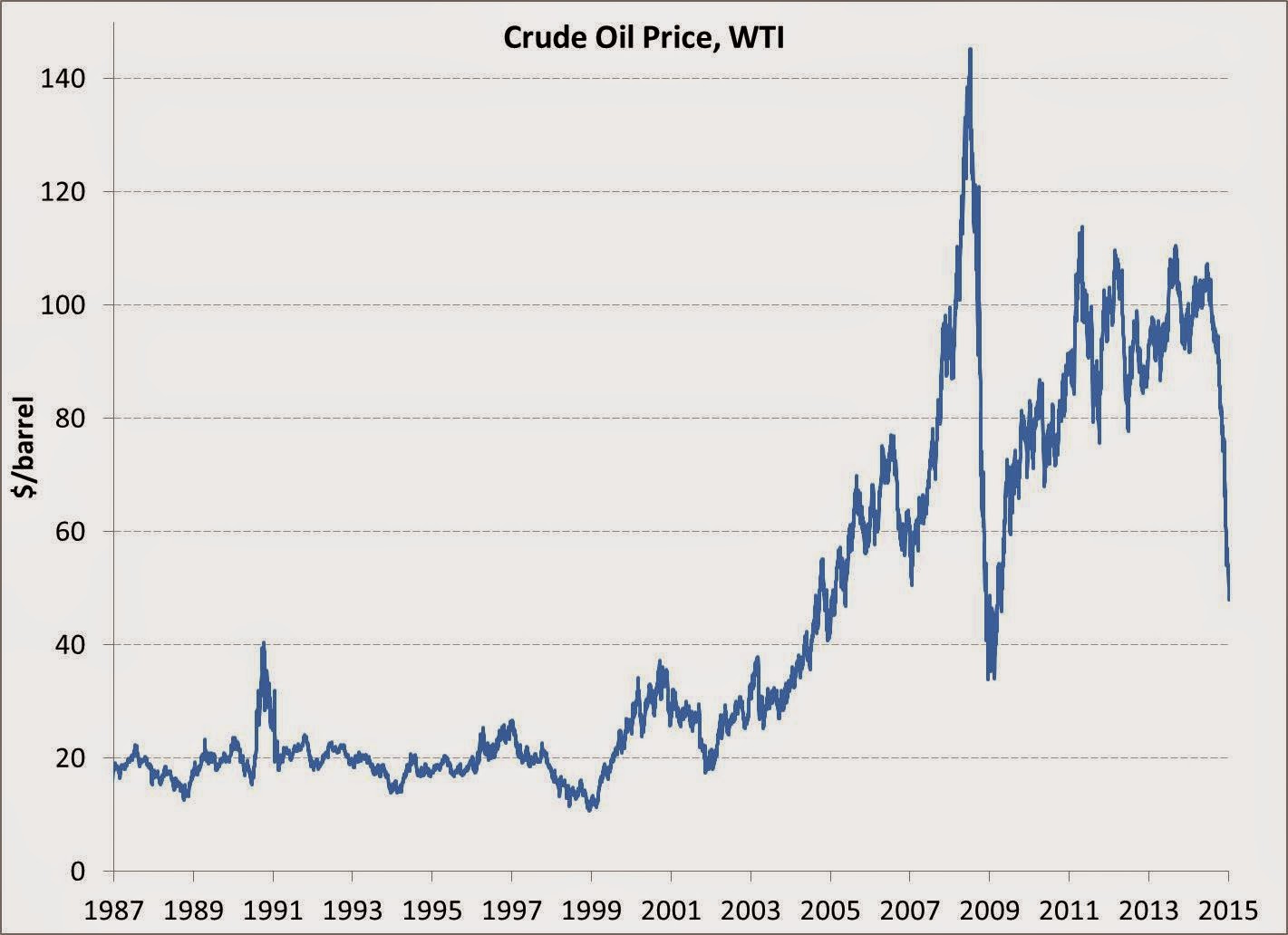 The same will occur in the bond market, only the ingrained belief that it is impossible to happen is far deeper.