Game Theory In Greece: Mutual Assured Destruction On The Table

The game theory standoff taking place between Greece and the rest of the Eurozone is fascinating. Last week John Mauldin described what occurred in Greece after they were "saved" with the previous bailout:

The solution forced Greece into a depression that reduced GDP by 25%, saw unemployment rise to 25% (nearly 60% among youth), forced Greeks (at least some of them) pay their taxes, and obliged the Greek government to try to balance its budget (kind of, sort of), the debt simply got worse. Now debt-to-GDP is 175%. If the Greeks couldn’t pay their debt at 120%, they have zero chance of paying it at 175%.

Eventually, Greek voters noticed that the agreement with the Troika (the ECB, the IMF, and the European Commission) didn’t seem to be working for them, so last month they voted in a new government that promised to change the agreement. The party that won the election, Syriza, had made lots and lots of promises about how they would make those mean old Germans back down and fork over the money. If we threaten to not pay the debt, the new government assured its citizens, the Europeans will give us more money, and we can even make them change the agreement. Of course, if the Greeks don’t get more money their system will be completely bankrupt, and their economy will collapse even further. (The technical economics term is that their economy will be screwed.)
This threat is somewhat like holding a gun to your own head and threatening to commit suicide if you don’t get your way.
Both parties understand there is Mutual Assured Destruction if a compromise is not met. The perspective from the rest of the Eurozone is pretty easy to understand. Banks throughout Europe holding a ton of Greek debt will experience massive losses if Greece were to exit and default. There would be even larger eruptions within the derivatives market. 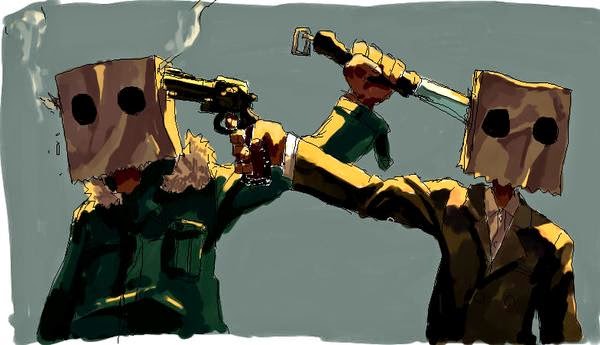 The second and probably even more important event would be the chain reaction in the bond markets for Spain and Italy. Right now everyone believes the system will be held together "at any cost" which allows the market to value all debt as backstopped by the entire Eurozone and the ECB. A change in this psychology would instantly bring us back to where we were in early 2012 before the "whatever it takes" announcement from the ECB.
From the Greek side of the negotiation table, a Grexit would be catastrophic to their economy and citizens in the short term. Sober Look walked through how a Greek exit would impact both sides:
First of all it's important to point out that the so-called "Grexit" is equivalent to a complete failure to pay on obligations by the Greek government, its banks, corporations, and households. While everyone is focused on the €315 billion Greece owes to the Eurozone, the IMF, and others, the damage to the euro area would actually be much greater. 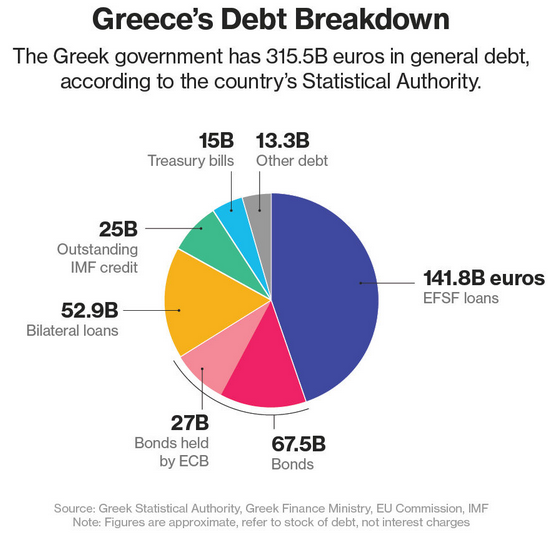 What nobody wants to talk about is the fact that internally most Greek loans - including mortgages - are in euros (some are even in Swiss francs). Greek banks hold €227 billion of loans and €12.4 billion of Greek government debt (plus roughly another €25 - €50 billion of Greek-based private sector bonds). Under a Grexit scenario, most debt (including government debt) will be converted to the new drachma at a preset exchange rate.
As the drachma collapses - and there is little question that it will - Greek banks, who would now have drachma assets and euro liabilities, will quickly fail as well, leaving the Bank of Greece holding the bag. The Bank of Greece which is currently part of the Eurosystem will therefore default upon exit. But before it exits, the Bank of Greece will draw on Target2 from the rest of the Eurosystem as Greeks quickly move their deposits out. And there is no question Greeks will try to move a great deal of their deposits out before they are converted to drachmas. In December alone they pulled €4.6 billion euros out of Greek banks - and that's before the Syriza victory.The default by the Bank of Greece could cause even more damage to the system than the losses to EFSF and to other entities such as the IMF. Between the government bonds the Eurosystem holds and the Target2 losses, the ECB may need to be recapitalized - a political disaster. Market anxiety alone could push the euro area back into recession as credit conditions tighten again (potentially similar to the Lehman situation).
I said over 5 years ago as this all began that Greece should default, devalue and start again with a fresh balance sheet. It would have been absolutely horrible for their country and their economy for about 3 years, but they would have eventually found a bottom and my guess is their country would be stronger today than it is now with the bailout option they chose. In addition, they would not have the impossible weight of their debt burden crushing them.
No politician will ever ask their citizens to suffer in the short term to ensure the long term strength of the country and the economy. Promises will always be made for short term fixes, which pushes more debt and printed money into the system and create a larger problem tomorrow. Greece is the perfect example. Next up, the rest of the world.
My guess is a Greek compromise will be met and the global day of reckoning will be pushed back for just a bit longer.