Should Americans Only Invest In Stocks While They Are Sleeping?

The chart below shows the growth of $1 invested in night returns (blue line) vs. day returns (green line) from 1993 to 2006 in the S&P 500 (SPY) exchange traded fund. The SPY is widely considered a broad measure of the overall U.S. stock market. 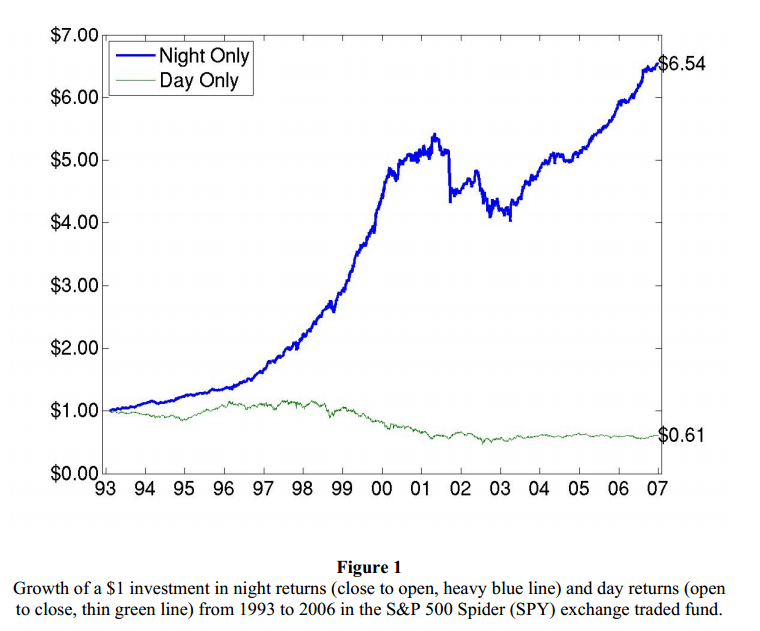 Alpha Architect provides mathematical equations and discusses the impact of trading and momentum positions from institutional U.S. investors, but could the answer to the incredible performance gap above be a more simple explanation?

During 1993 to 2006 there was an explosion of growth from emerging markets around the world. The general trend was to export goods to the United States, receive dollars as payment and reinvest those dollars back into the United States to keep their domestic currency from appreciating rapidly. While a large portion of this capital made its way into the U.S. debt markets (both government bonds and Fannie/Freddie mortgage backed securities), there was a steady stream into the stock market as well. That capital would be employed while those countries were awake and U.S. investors were sleeping.

I don't know the answer because it is impossible to track the day to day investments of the People's Bank of China or Saudi Arabia's sovereign wealth fund, but this seems like a more logical explanation.