Snapchat Valued At $19 Billion: No Profits, No Problem

Here we go again. Another tirade from some old geezer on why social media companies are overvalued. As a warning, I don't use Facebook, I don't use Twitter, and I don't use Snapchat. I get my information through a program called Feedly (which organizes articles from sites I want to read every day), and when I want to communicate with friends I usually pick up the phone to call them or go visit them in person.

I know, I know. I have no understanding of how the world works today.

With that disclaimer in place, let's look at this week's valuation bombshell; Snapchat. They just completed their most recent round of venture funding which valued the company at $19 billion. Snapchat is a program that allows you to send pictures to friends, which then disappear after 10 seconds.

The company just recently began their advertising program, which will generate some revenue for the company. As with most tech start-ups, the profits will come later, hopefully. Here is the $19 billion valuation crowd Snapchat finds itself in today. You can see that around them are Mosaic, Omincom and Consolidated Energy, which bring in over $1 billion in net profits annually. 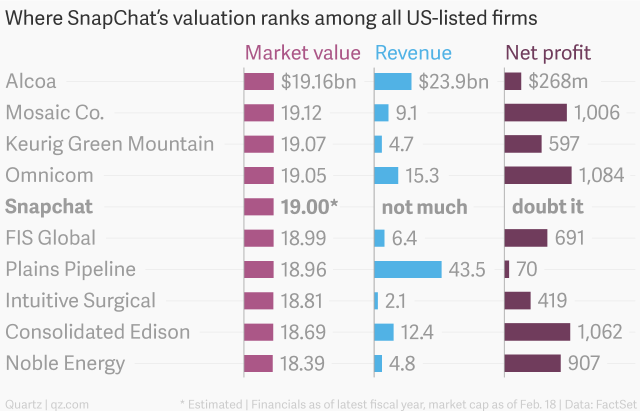 Being the old geezer I am, I think in a few years Snapchat is going to be worth less than $19 billion. Much, much less.