Back in September 2012 the Shanghai composite index had fallen to 2060 (from over 6000 in 2007), and I wrote an article titled China's Stock Market Continues To Plunge: Buying Opportunity?  I described what I saw as a buying opportunity in Chinese shares due to the deep sell-off, entrenched pessimism and China's long term economic growth potential.

Things have changed significantly since then. The Shanghai composite index crossed above 3750 this week, up a staggering 80% in just the past 8 months. The once forgotten market has now become the new darling investment opportunity for both Chinese citizens and investors around the world.

Due to the real estate slow down, Chinese citizens are utilizing the stock market as the new place to park wealth. Hot money had flooded into the market like a tsunami. Domestic share accounts have surged as average citizens have found a new speculation. 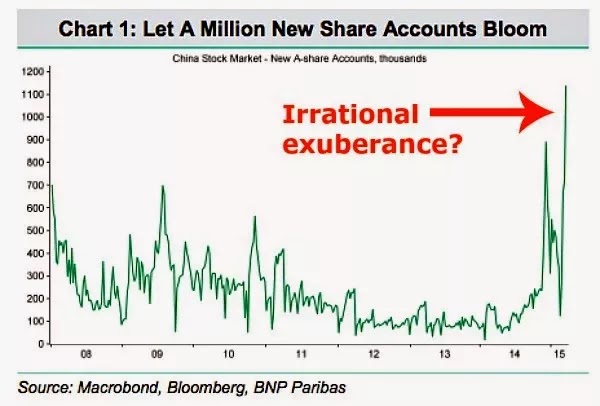 This has the potential to run a lot longer and higher, especially if the Chinese leadership continues to both discuss and implement monetary easing policies, but I'm out.

Price to earnings ratios have soared, sentiment is euphoric and there are severe underlying problems with China's economic growth potential in the short term (I am a huge long term bull on China growth).

For those entering the party now looking to ride the wave higher, good luck. I'm taking my winnings and going home. I'll be on the sidelines waiting for the next crash, looking foolish every day until it comes.