Other Voices On The Current State Of The Financial Markets


We have seen though some strange things, with economics 101 turned on its head. We've seen that falling prices produce more supply, as the biggest producers see that they can take market share and use the opportunity by reducing average costs through excess production. We've seen that in the oil, minerals and iron ore industries. We have also seen in the last couple of years that as bond yields fall, governments are able to issue more debt.

But this time round the problem we have as well is that politics will start to rear its head and we are left to deal with politicians who are increasingly critical of the capitalist system’s ability to allocate capital and provide for society.

For me the shorting opportunity looks as great as it was in 07/09, if only because people are still looking at what is happening and believe that each event is an individual, isolated event. Whether it’s the oil price fall or the Swiss franc move, they’re seen as exceptions.

This down cycle is likely to be remembered in a hundred years, when we hope it won’t be rated for “How good it looks for its age!”. Sadly this down cycle will cause a great deal of damage, precisely because it will happen despite the efforts of the central banks to thwart it. 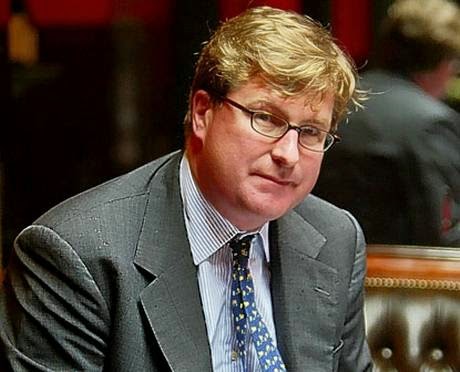 From Albert Edwards of Societe Generale:


"With equity markets galore hitting record highs clearly I must be missing something big! We are at that stage in the cycle where I begin to doubt my own sanity. I’ve been here before though and know full well how this story ends and it doesn’t involve me being detained in a mental health establishment (usually)."

"Investors are transfixed instead by the Fed and when it will tighten rates and can't see the wood for the trees. The Fed's focus on payrolls, a lagging indicator, is most perplexing but not unusual at this stage in the cycle. The reality is that the vast bulk of economic, as well as earnings, data (even outside the energy sector), has been simply dreadful."

“The next shoe to drop will be the realization that the US recovery is stalling and outright deflation is as big a threat there as it is in the eurozone, Indeed my former esteemed colleagues Marchel Alexandrovich and David Owen pointed out to me that if US core CPI is measured in a similar way to the eurozone (i.e. ex shelter), then US core CPI is already pari pass with the eurozone – despite the former having enjoyed a much stronger economy! … The biggest surprise will be when investors realize that, despite the US having recently been the single engine of global growth, the US deflation threat is every bit as immediate as that in the eurozone.”

From Grant Williams, portfolio and strategy advisor for Vulpes Investment Management in an interview this week with Peak Prosperity:

We don’t know how it will end, but something has to give. It’s a question of what it will be. Because when you start playing with the forces of nature you can suppress them for a while, but they will eventually overwhelm you. We've seen this constantly throughout history. I’m a big reader of and a big follower of history because I think the answers to everything lie in there somewhere if you pay attention to the signals.
So, for example, the central banks interfering with the natural price of capital by suppressing interest rates and fixing somewhere where they really shouldn't be you at that point, have interfered with every single transaction on the face of the planet. And so if you interfere with every transaction that happens on any given day anywhere in the world you are going to get transactions that are not natural. And if they’re not natural at some point they will revert to where they ought to be and I think we’re starting to see that. We saw that in Switzerland, we saw the natural forces reassert themselves once that peg was removed, and it was incredibly violent. And it moved the idea of hyper-volatility back into the public conscious.
Imagine what happens when the Fed does the same thing and says “Hey you know what we promised you for the last six years? Well we can’t fight this thing forever. We’re out”. Imagine the volatility that’s going to unleash. And at some point, this has to happen. Sure, plenty of people can make hay while we go along and they can close their eyes to what they may instinctively know is true and they can buy the markets and they can chase the trend and they can follow these things up. But at some point, it’s going to turn around and bite them. When that happens, if you’re not prepared for it or you’re still fully invested, there will be no way out. Not in the time frame you need and not at the prices you want.
What we risk is a switch in the market, a real switch -- which is something that obviously the central banks and governments of the world are desperately trying to avoid happening. When that occurs, we will see how this new world works in the opposite direction. And it’s going to work similar, except for the fact that you’re going to have a bunch of people looking to sell alongside the robots. And when markets are going up it’s very, very easy to product more stock. People can issue more shares, there’s always new stock if you want to buy it. But if instead you want to sell stock, you need a bid -- and this is something people often forget: sometimes there are no bids. And where there are no bids, you can’t sell. The first bid you might see may be down 20, 30, 40%. Guess what? The robots may well start hitting those; so you’re going to see incredible dislocations in markets once the wind changes direction and markets head the other way.
A tremendous number of people talk to me about how the financial system is broken  -- and they mean that in the worst possible way, in that this doesn't work anymore. And when we do get this resumption of natural forces, people are genuinely concerned about what happens at that point because what do you do with an entire financial system that doesn't work anymore? They’re very afraid about the steps that will be taken to counteract the amount that has built up by the interference over the last six years by outside agencies that have as I said corrupted -- and I use that term in the true sense of the word -- that have corrupted price signals all around the world. The financial system that we've all grown up with and that every economics text book talks about doesn't exist anymore. This reality is not going to be obvious to everybody until it just stops working. And very, very smart people are very, very nervous about that. 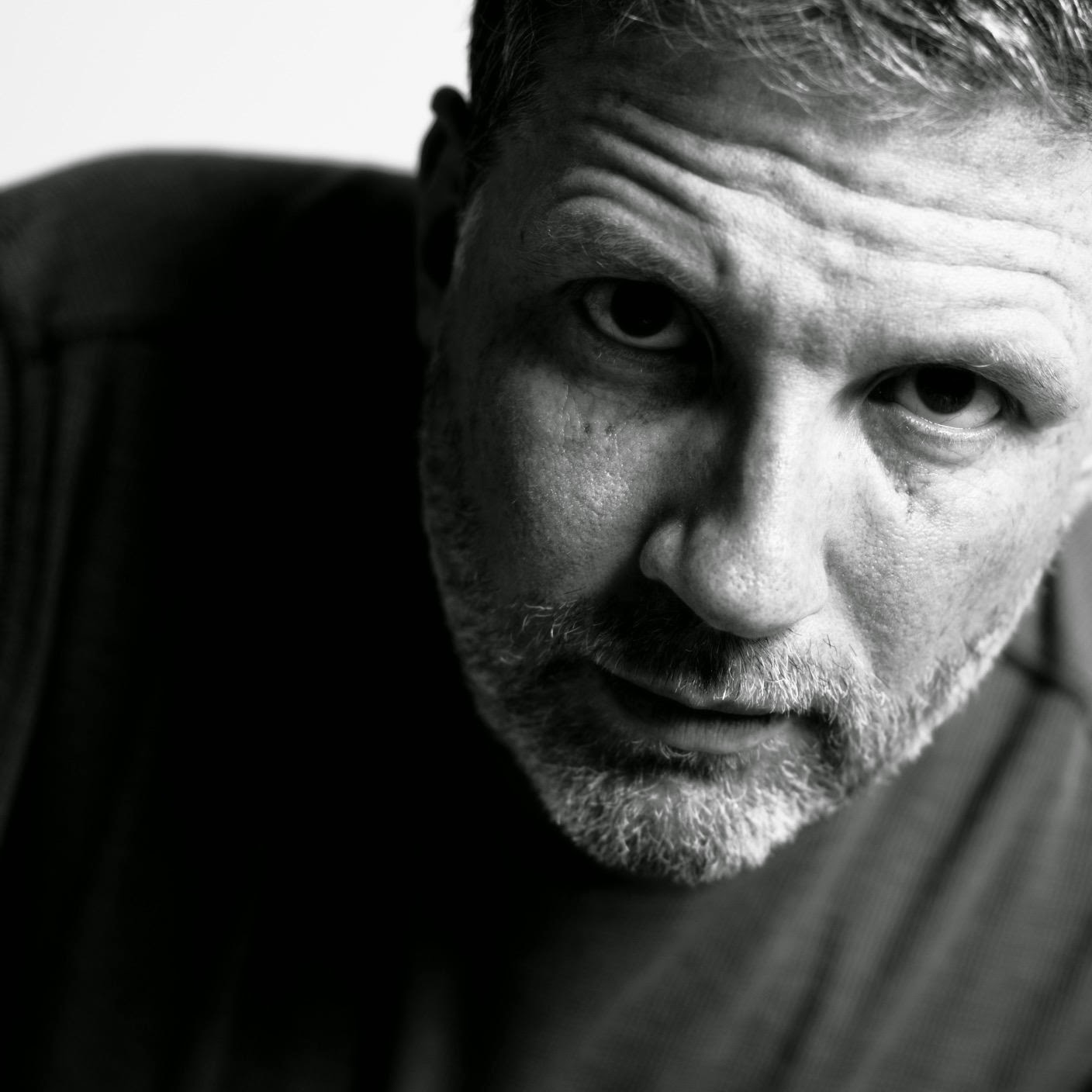 From the most recent Fed minutes on asset bubbles:


Relatively high levels of capital and liquidity in the banking sector, moderate levels of maturity transformation in the financial sector, and a relatively subdued pace of borrowing by the nonfinancial sector continued to be seen as important factors limiting the vulnerability of the financial system to adverse shocks.However, the staff report noted valuation pressures in some asset markets. Such pressures were most notable in corporate debt markets, despite some easing in recent months. In addition, valuation pressures appear to be building in the CRE sector, as indicated by rising prices and the easing in lending standards on CRE loans. Finally, the increased role of bond and loan mutual funds, in conjunction with other factors, may have increased the risk that liquidity pressures could emerge in related markets if investor appetite for such assets wanes. The effects on the largest banking firms of the sharp decline in oil prices and developments in foreign exchange markets appeared limited, although other institutions with more concentrated exposures could face strains if oil prices remain at current levels for a prolonged period.


Unless we observe a rather swift improvement in market internals and a further, material easing in credit spreads – neither which would relieve the present overvaluation of the market, but both which would defer our immediate concerns about downside risk – the present moment likely represents the best opportunity to reduce exposure to stock market risk that investors are likely to encounter in the coming 8 years.

Last week, the cyclically-adjusted P/E of the S&P 500 Index surpassed 27, versus a historical norm of just 15 prior to the late-1990’s market bubble. The S&P 500 price/revenue ratio surpassed 1.8, versus a pre-bubble norm of just 0.8. On a wide range of historically reliable measures (having a nearly 90% correlation with actual subsequent S&P 500 total returns), we estimate current valuations to be fully 118% above levels associated with historically normal subsequent returns in stocks. Advisory bullishness shot to 59.5%, compared with only 14.1% bears – one of the most lopsided sentiment extremes on record. 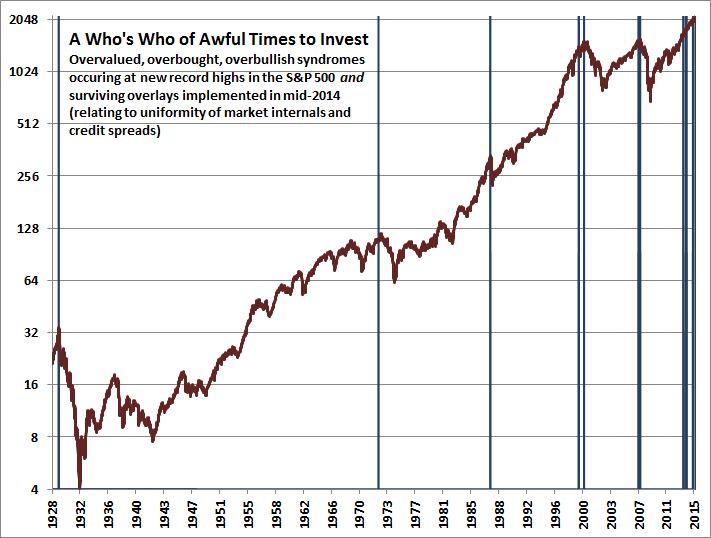