An excellent visual below of the BRICS (Brazil, Russia, India, China & South Africa) stock price performance since January 2002. People often reference China's violent share price rise in 2006 - 2007, but it looks tame in comparison to what took place in the other BRICS. 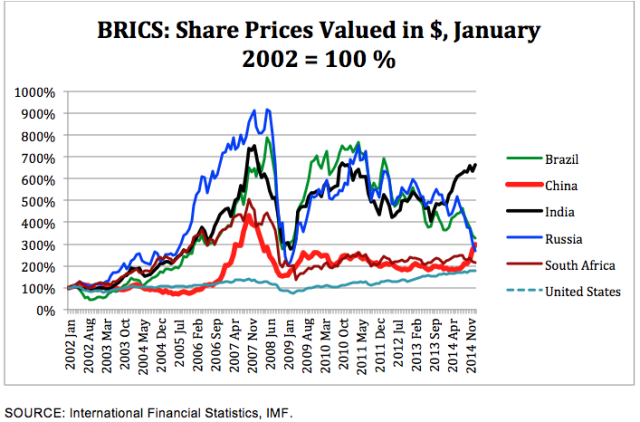 Some of these countries have once again been counted down and out after the most recent commodities sell-off with both their share markets and currencies taking a plunge (Russia, South Africa, Brazil). India and China have separated from the pack over the last two years with a stable currency and a rising share market (they depend less on commodity exports for growth).

As the U.S. stock market moves further and further into overvaluation and these emerging markets continue to cheapen, the BRICS are becoming far more attractive on a relative basis. My belief is after the next crash, these countries will lead on the way up again both in currency appreciation and stock market growth.