The Chinese stock market has been moving in an upward parabolic surge for many months now. The trouble is their economic growth is not. For those that still care that stock prices are backed by something based in reality (and there are few people left who do), the following chart should be troubling. LEI stands for Leading Economic Indicators: 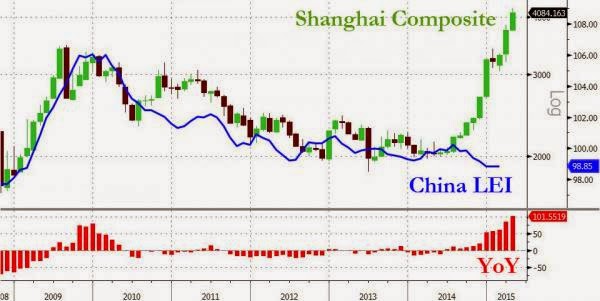 A large part of the fuel behind China's stock market rally has been the steady decline in real estate prices. Hot money has moved from purchasing brand new unoccupied apartments to the surging stock market in hopes of catching the next wave.

China's public and private debt has grown from $2 trillion in 2000 to over $28 trillion as of last year. 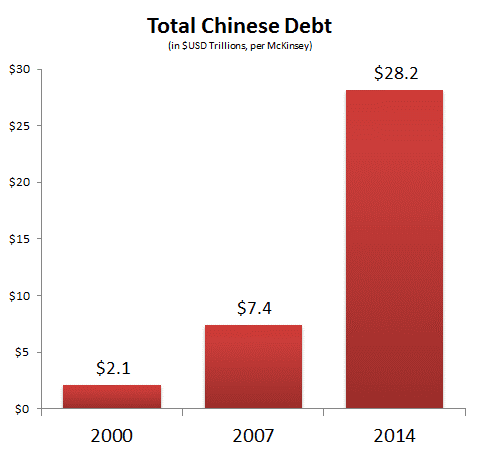 This debt growth has supercharged their economic growth with their GDP approaching $10 trillion in size.

I believe even though China will own the 21st century they are approaching their first major Minsky Moment of their magical growth story. Their debt burden will soon reach the point where it will either slow the economy drastically or push them into a crisis.

Remember that while the United States was the economic growth story of the 20th century the country endured the Great Depression in the early 1930's, which paved the way for the peak period of prosperity in the 1950's and 1960's (American prosperity has been in a slow decline since and will soon enter a free fall collapse).

If someone told me I could only buy one market, put my shares in a time capsule, and wake up 30 years from now I would purchase Chinese stocks. If someone asked me what market I would like to purchase and hold for the next year I would be far more interested in Brazilian shares.