Robert Shiller discusses the grossly overpriced stock market in the United States based on his CAPE price to earnings ratio. He says there are relative values around the world in markets such as Singapore and Hong Kong. As I have said since the start of the year, if you live in the United States and want to invest in stocks do not let home bias keep you over weighted within the domestic market. You can look around the world to find Shiller's relative value.

Here is the updated CAPE chart for U.S. stocks, hitting 27.85 as we enter the month of April. In an interview with Bloomberg earlier this week Shiller commented that 10 year returns at these levels are historically flat because "inevitably there is a major correction." 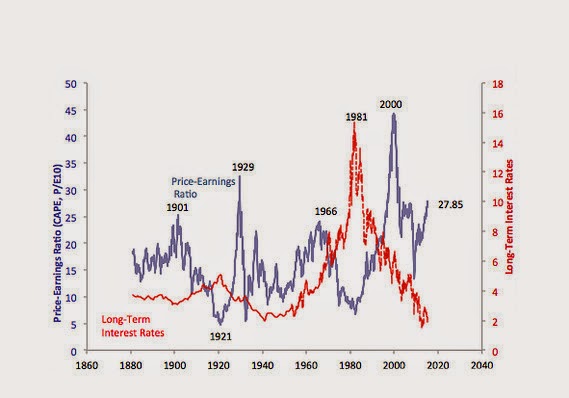 For more on why U.S. stocks today are more over priced than 1929 and even the 2000 mania peak see: Averaging Valuations Shows U.S. Stocks More Dangerous Than The 1929 Peak