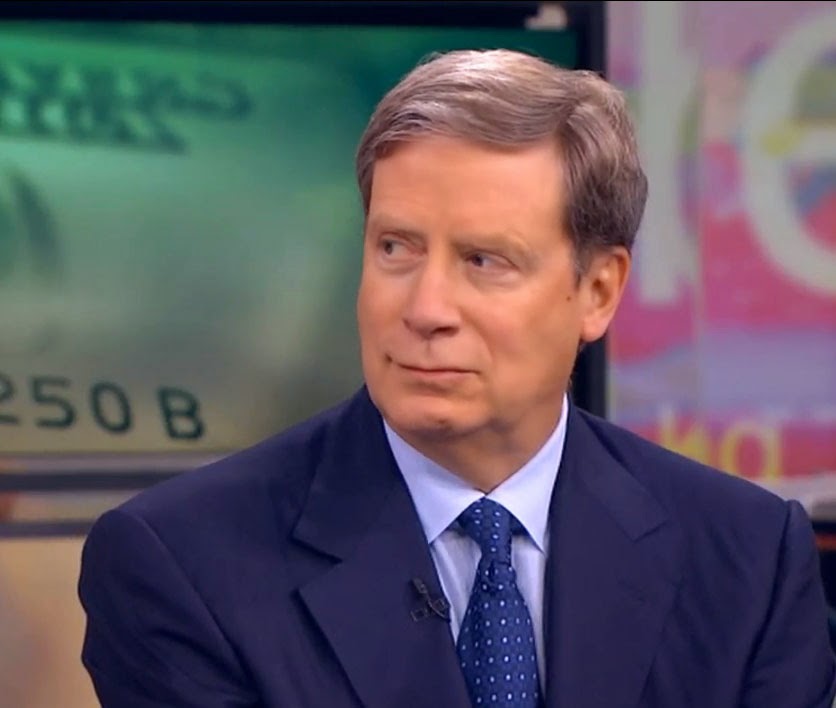 A speech billionaire Stanley Druckenmiller gave in January this year was released to the public on Friday. Druckenmiller ran the legendary Quantum fund with George Soros in the 1990's. He was well ahead of the 2008 crisis and profited handsomely during the crash. You can read the entire transcript of the speech here. The following are the sections I found most interesting (I added the chart on covenant lite loans):

On investing in the future tense, not the present.....

First, never, ever invest in the present. It doesn't matter what a company's earning, what they have earned. Speros Drelles taught me that you have to visualize the situation 18 months from now, and whatever that is, that's where the price will be, not where it is today. And too many people tend to look at the present, oh this is a great company, they've done this or this central bank is doing all the right things. But you have to look to the future. If you invest in the present, you're going to get run over.

One of the things I would say is about 80 percent of the big, big money we made was in bear markets and equities because crazy things were going on in response to what I would call central bank mistakes during that 30-year period. And probably in my mind the poster child for a central bank mistake was actually the U.S. Federal Reserve in 2003 and 2004. I recall very vividly at the end of the fourth quarter of 2003 calling my staff in because interest rates, fed funds were one percent. The nominal growth in the U.S. that quarter had been nine percent. All our economic charts were going through the roof, and not only did they have rates at one percent, they had this considerable period - sound familiar? - language that they were going to be there for a considerable time period.
So, I said I want you guys to try and block out where fed funds are and just consider this economic data and let's play a game. We've all come down from Mars. Where do you think fed funds would be if you just saw this data and didn't know where they were? And I'd say of the seven people the lowest guess was 3 percent and the highest was 6 percent. So, we had great conviction that the Federal Reserve was making a mistake with way too loose monetary policy. We didn't know how it was going to manifest itself, but we were on alert that this is going to end very badly.
Sure enough, about a year and a half later an analyst from Bear Stearns came in and showed me some subprime situation, the whole housing thing, and we were able to figure out by mid-'05 that this thing was going to end in a spectacular housing bust, which had been engineered - or not engineered but engendered by the Federal Reserve's too-loose monetary policy and end in a deflationary event. And we were lucky enough that it turned out to be correct. My returns weren't very good in '06 because I was a little early, but '07 and '08 were - they were a lot of fun.
So, that's why if you look at today I'm experiencing a very strong sense of deja vu.
How the credit markets today compare with the last bubble peak.....

Okay. I mentioned credit. Let's talk about that for a minute. In 2006 and 2007, which I think most of us would agree was not a down period in terms of speculation, corporations issued $700 billion in debt over that two-year period. In 2013 and 2014 they've already issued $1.1 trillion in debt, 50 percent more than they did in the '06, '07 period over the same time period. But more disturbing to me if you look at the debt that is being issued, Kenny, back in '06, '07, 28 percent of that debt was B rated. Today 71 percent of the debt that's been issued in the last two years is B rated. So, not only have we issued a lot more debt, we're doing so at much less standards.
Another way to look at that is if those in the audience who know what covenant-light loans are, which is loans without a lot of stuff tied around you, back in '06, '07 less than 20 percent of the debt was issued cov-light. Now that number is over 60 percent. So, that's one sign. 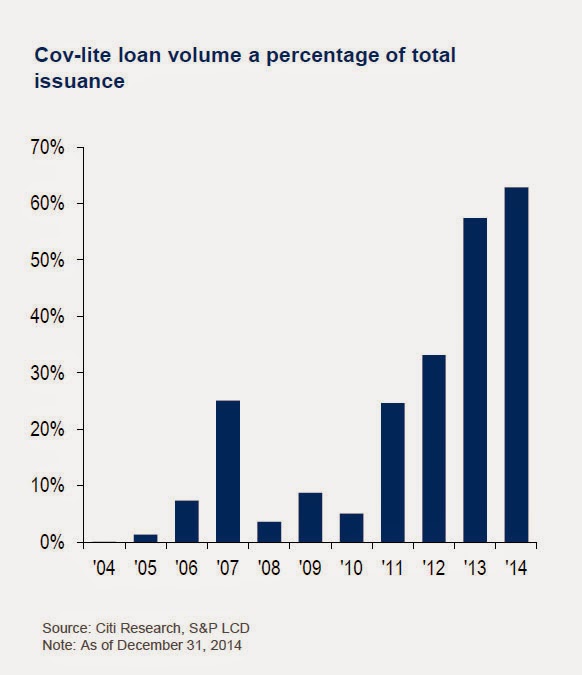 The other sign I would say is in corporate behavior, just behavior itself. So, let's look at the current earnings of corporate America. Last year they earned $1.1 trillion; 1.4 trillion in depreciation. Now, that's about $2.5 trillion in operating cash flow. They spent 1.7 trillion on business and capital equipment and another 700 billion on dividends. So, virtually all of their operating cash flow has gone to business spending and dividends, which is okay. I'm onboard with that.
But then they increase their debt 600 billion. How did that happen if they didn't have negative cash flow? Because they went out and bought $567 billion worth of stock back with debt, by issuing debt. So, what's happening is their book value is staying virtually the same, but their debt is going like this. From 1987 when Greenspan took over for Volcker, our economy went from 150 percent debt to GDP to 390 percent as we had these easy money policies moving people more and more out the risk curve. Interestingly, in the financial crisis that went down from about 390 to 365. But now because of corporate behavior, government behavior, and everything else, those ratios are starting to go back up again.
Look, if you think we can have zero interest rates forever, maybe it won't matter, but in my view one of two things is going to happen with all that debt. A, if interest rates go up, they're screwed and, B, if the economy is as bad as all the bears say it is, which I don't believe, some industries will get into trouble where they can't even cover the debt at this level.
And just one example might be 18 percent of the high-yield debt issued in the last year is energy. And I don't mean to offend any Texans in the room, but if you ever met anybody from Texas, those guys know how to gamble, and if you let them stick a hole in the ground with your money, they're going to do it. So, I don't exactly know what's going to happen.  I don't know when it's going to happen. I just have the same horrific sense I had back in '04. And by the way, it lasted another two years. So, you don't need to run out and sell whatever tonight.
On central bank monetary policy....

The fed keeps talking about deflation, but there is nothing more deflationary than creating a phony asset bubble, having a bunch of investors plow into it and then having it pop. That is deflationary. But the point I was making earlier is there was a great enabler, and that was the Federal Reserve... pushing people out the risk curve. And what I just can't understand for the life of me, we've done Dodd-Frank, we got 5,000 people watching Jamie Dimon when he goes to the bathroom. I mean all this stuff going on to supposedly prevent the next financial crisis. And if you look to me at the real root cause behind the financial crisis, we're doubling down.

Our monetary policy is so much more reckless and so much more aggressively pushing the people in this room and everybody else out the risk curve that we're doubling down on the same policy that really put us there and enabled those bad actors [ph.] to do what they do. Now, no matter what you want to say about them, if we had had five or six percent interest rates, it would have never happened because they couldn't have gotten the money to do it.
h/t Zero Hedge