Why Are Average Americans Not Purchasing U.S. Stocks?

We hear continuously from financial advisors the average American has not returned to buying U.S. stocks, which is a bullish sign because there is "money on the sidelines." A recent poll by the Wall Street Journal found it is indeed true that most Americans are not purchasing U.S. stocks, but the most common reason cited is not because they are afraid of the market.


"Nearly seven years after the Panic of 2008, and six years after a massive rally started, more Americans are out of the stock market than in it, according to a new survey from Bankrate finds, and for younger investors the numbers are even more lopsided.
About 52% of Americans are not investing in the stock market, the survey found, and it’s not necessarily that they still don’t trust the market. It’s because they simply don’t have the money. Fully 53% of people who aren’t in the market now said they weren’t investing in the market because they didn’t have the funds to do so. A study from the National Institute on Retirement Security found that 45% of working-age households had no retirement savings at all; among the 55-64 age group, the average was only $12,000."
So if individuals are not pushing this market higher who is? As we have discussed in depth over the past few years it is institutional funds, central banks, banks, hedge funds and corporations themselves. Yes, companies are buying back their own shares (many using debt to make the purchases). Sounds like a ponzi scheme? Well, let's just say that it will not end well.

More from the Wall Street Journal:


The value of new share repurchase programs authorized by companies stood at $257 billion in the first quarter, the strongest start to the year for buyback programs on record, according to a report by Birinyi Associates Inc.
At the current pace, stock buyback authorizations are set to total $1 trillion this year, blowing past 2007’s record of $863 billion, according to Birinyi. And that count doesn’t include General Electric Co.’s $50 billion buyback program announced last week, which ties with Apple Inc.’s as the largest share repurchase program ever announced. 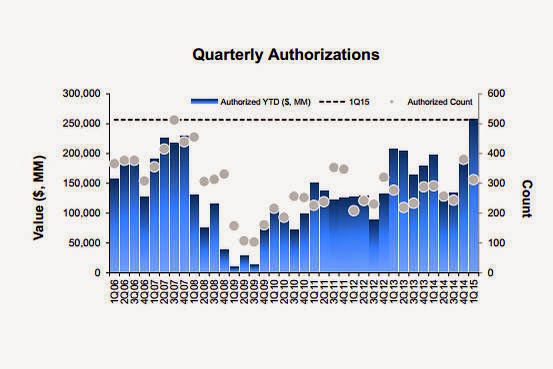