Negative Yields Peak In Europe: Is The Bond Market Top Finally In?

You know the world has gone mad when charts no longer measure the yield on bonds but instead measure the total volume of negative yielding bonds. Yes, those bonds where you give someone your money and pay them to hold it.

The total volume of negative yielding bonds in Europe peaked at 2.8 trillion euros on April 20 and has fallen to "only" 2 trillion euros this week. This is due to a sharp rally in interest rates across the board over the last month. 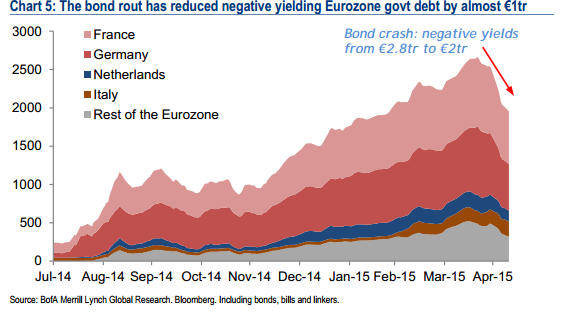 Was April 20 the final mania peak in the 34 year global bull market in bonds? Only time will tell. What we do know is one day yields will begin rising around the world and they won't stop, reverse course, and move lower to new record lows. Many people in both business and finance today have never experienced a period of rising rates in their working lifetime (usually starts around 22 years old). They would need to be about 59 years old today to have caught the last two years of rising rates in the late 1970's during their working years. We'll see how the world handles swimming against the current while it has a $200 trillion debt cinder block tied around its ankles. My guess is while the world is trying to deleverage (pay down debt) during a period of rising rates, there will be severe financial earthquakes along the way.