Looking from a time perspective means we have one more major downturn before the new secular bull market begins (it would fit nicely in the 15 to 20 year trend if the markets put in their final secular bottom between 2015 and 2020.

Last week John Mauldin looked at the current secular bear market through the lens of valuation (instead of time) using some excellent charts from Crestmont Research. The P/E ratio is simply the price investors are willing to pay for a company's earnings. When investors favor stocks they pay a higher price for their earnings. When stocks are out of favor they pay a lower price.

Secular bear markets tend to bottom when stocks are out of favor and hated. This is what we saw in the early 1980's at the start of the last secular bull. 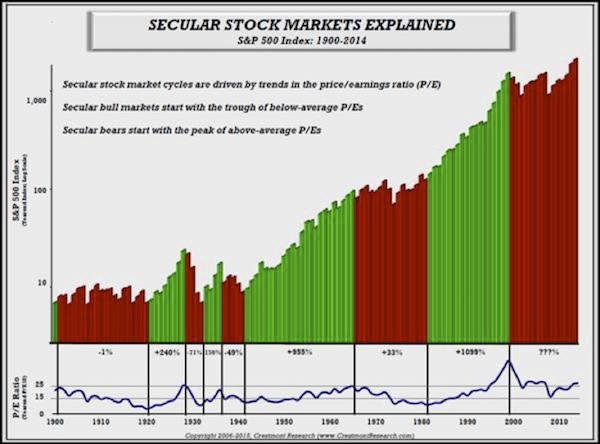 The chart below shows where previous bear markets began and ended in terms of their P/E ratio. In March of 2009 stocks did not reach the range where bear markets normally end (they never got cheap enough - see below with the blue line). They really only reached about fair value after the crash. We started the current cyclical bull market about 50% higher than the point a normal secular bull market would begin. 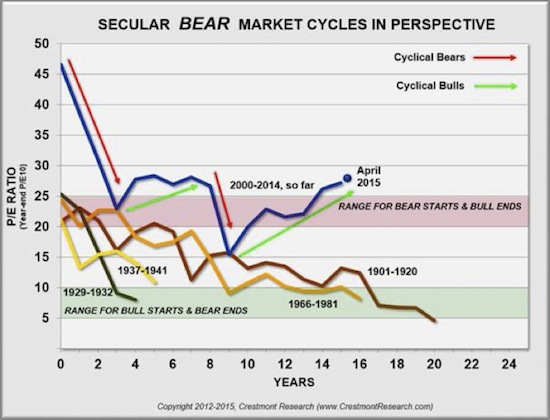 The next chart shows where secular bull markets historically begin (in terms of P/E ratios) and end. Mauldin notes that the reason this bear market has taken so long to complete is we began from a historic high in stock market confidence (the mania peak in 2000). It takes a long time to wash away the euphoria and it doesn't help when you have a government and central bank doing everything in their power to artificially push stock prices higher. 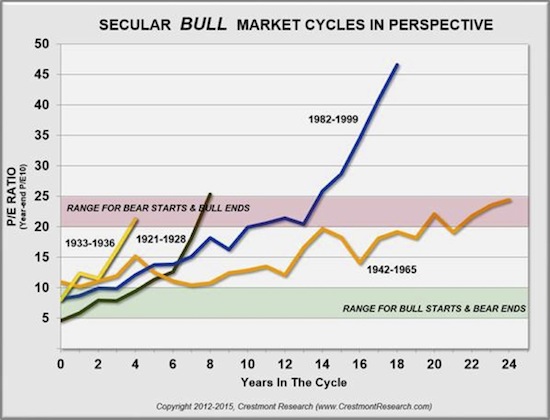 The following chart shows the last secular bear market from 1965 through 1981. There were huge cyclical bull and bear markets within the secular cycle. 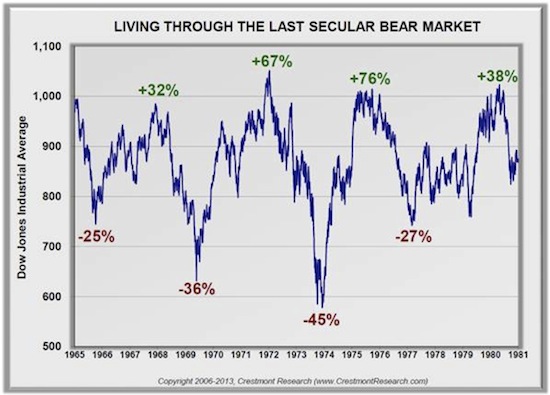 Here is where we stand in the current secular bear, which began in 2000. It is like the 1970's only on steriods as the Federal Reserve has entered the market to turbocharge monetary policy after crashes. This has created a recurring bubble then crash environment. 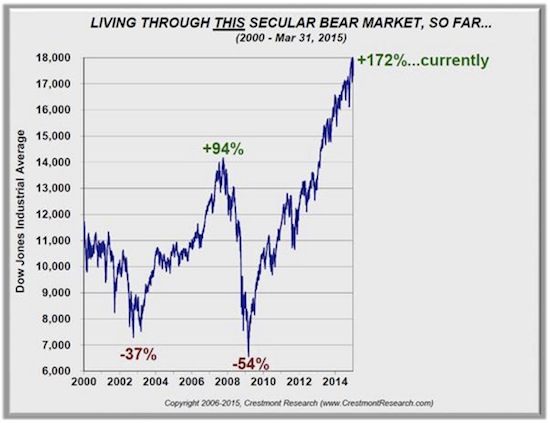 Sentiment levels reached extremes seen at the peak of previous cyclical bull markets beginning in early 2012. However, something strange happened this time; stocks kept rising and the market has continued to stay in the euphoric state for an unprecedented three years running. What we have seen from early 2012 to present day in terms of bullish sentiment is anomaly, but we have been surrounded by it for so long now that people assume it will be with us forever.

We just witnessed the largest month of stock buybacks in history this past April (meaning companies have joined the madness and they are spending their cash (and going into debt) to purchase their own shares). This shows euphoria has spread from not only individuals and institutions, but the actual companies themselves. 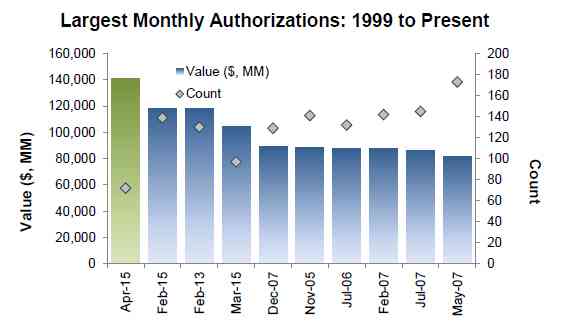 May was the largest month of mergers and acquisitions in history at $241.6 billion, topping May 2007 ($225.8 billion) and January 2000 ($212.7 billion). The previous records clocked in right at the point of maximum euphoria and were just a few months before the next major crash.

The percentage of companies going public that are unprofitable just crossed above 78%, taking out the previous high of 76% back in 2000. Making a profit is no longer important to investors because they "know" share prices will surge on IPO day and there will always be another willing buyer ready to purchase at a higher price. 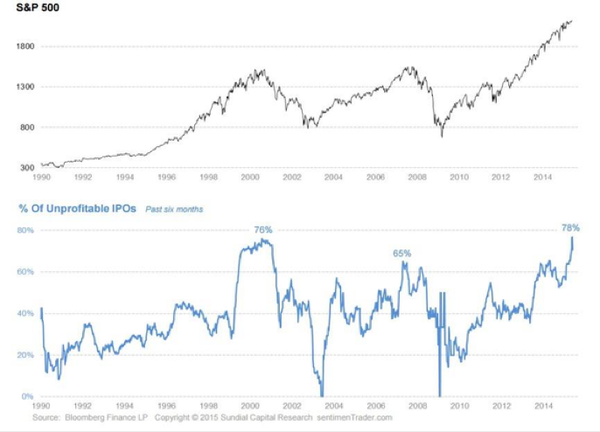 Margin debt on the NYSE has also crossed into new all time inflation adjusted highs, taking out the peak in 2000. Investors are willing to borrow money to buy shares at a pace never seen in history. 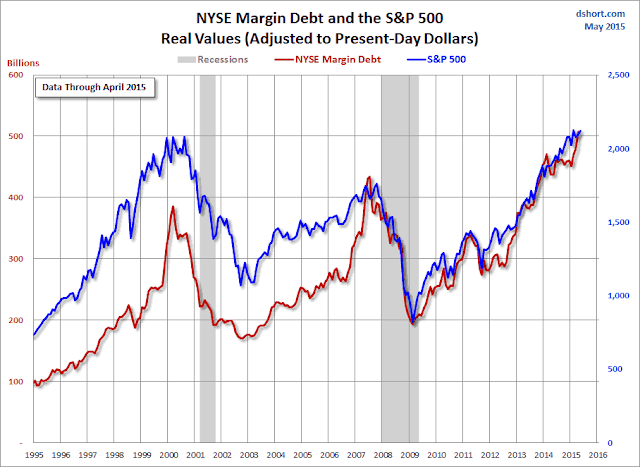 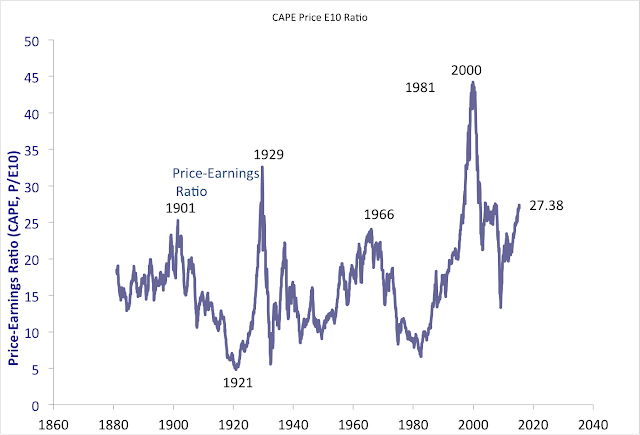 I believe the CAPE will cross into single digits before it reaches its secular bear market low. When that moment arrives we will once again hear how investors "will never enter the market again," just as they did in 1981. Then you will know it is time to buy.

For more see: Absolute Vs. Relative Value: What If Everything Is Expensive?