The following is an excellent chart from Elliott Wave showing the bullish intervention announcements from the U.S. government and Federal Reserve during the 2008 collapse. It is important to reflect back on this chart before the next major crisis begins. Every announcement was immediately followed by a larger relief rally, followed by the market continuing its descent lower. The market continued to fall past where this chart ends to the now famous 666 mark in early March. Click for larger image: 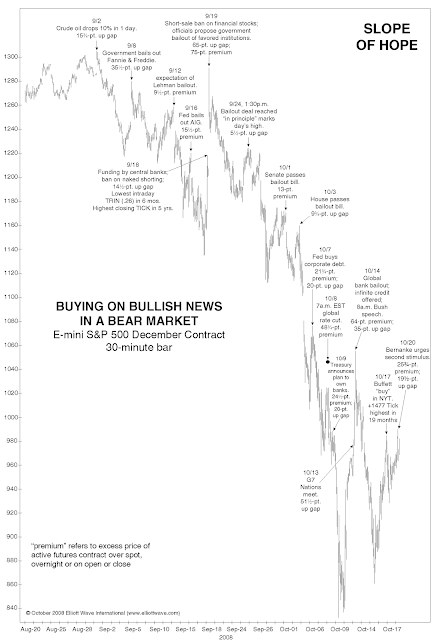 Markets have pushed higher after every major announcement from the U.S. government and Federal Reserve since early 2009. Investors pull up charts and layer these bullish intervention announcements over the charts (think of the QE charts showing how QE "always" moves markets higher). Investors now believe these announcements are the direct cause of the bullish trend over the past 6 years.

With this causation analysis now entered into the history books as fact investors feel 100% confident any market decline will instantly be stopped and reversed by central bank or government intervention. Hopefully the chart above will be a reminder this "fact" is indeed myth, which will be proven again during the next major market decline.