The people of Greece sent a nice little gift to Germany and the rest of the European leadership Sunday night with their "No" vote for additional bailouts (additional debt they can never repay in return for immediate spending cuts). 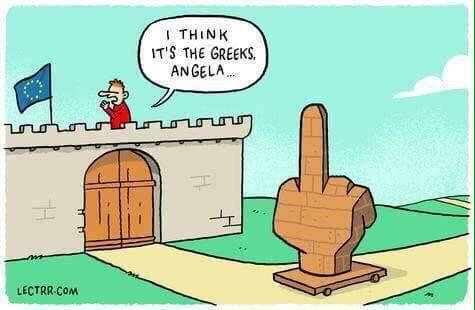 This does not mean Greece will ultimately say no to a bailout package, but it gives them political courage to go back to the negotiating table with a country behind them. To be honest, I was surprised by the vote results. By voting no, it could impact pension payments and the ability for banks to open their doors. Defaulting on the debt owed would create a much tougher short term road for the country as a whole, but it would create a much stronger country with a foundation for growth in the future.

As an American I wish our leaders gave us the opportunity to vote back in 2008 if we wanted to nationalize the banking system, the housing market (Fannie & Freddie), the automobile industry (General Motors) and the student loan market.

We have lived in a perverse world in America since early 2009 where the banking system keeps the profits during booms and receives taxpayer aid during the busts. No one pays attention during the boom (2009 to present) as long as 401k's and home prices are rising in value, but I assure you they will pay attention during the next collapse (coming soon).

For more see: Greece Is Only A Preview Of The Real Crisis