In the early 2000's I began reading a lot about financial history and the growth of debt taking place around the world. This reading led me to investing in gold and silver, which I began to accumulate in late 2004. I purchased month in and month out until early 2008 when it felt like the metals were beginning to receive global attention and the prices felt expensive relative to where I began purchasing.

Essentially, my purchases in 2004 - 2007 looked great on paper up until 2011, and my holding and buying have looked stupid on paper ever since, while gold and silver have fallen relentlessly over the past four years.

I consider myself someone who still has many working years ahead of them, which I hope means many years of adding to my investment portfolio. With that understanding, if I believe an investment has strong long term fundamentals, lower prices make the investment more attractive to me. If an investment goes up in price (all other factors staying the same) the asset is less attractive to me.

I have covered this topic surrounding investor psychology numerous times in the past, but it is important to review again today as it correlates perfectly to what is currently taking place with precious metals.

I mentioned I began purchasing gold and silver in 2004 because I was concerned about global debt growth. What has happened since 2007? Global debt has mushroomed in size while incomes and economic growth have been stagnant or in decline. I use the 2007 date because many people believe the world has gone through some sort of deleveraging (reducing debt) since the financial crisis began. The exact opposite has occurred with individual, corporate and government balance sheets swelling in size.

See: A Look Behind The $57 Trillion Increase In Global Debt Since 2007

It was clear to investors following the financial crisis why someone would own gold in their portfolio. Many individuals, corporations, banks and governments would be unable to make good on the money they borrowed if a creditor ever asked them to repay the debt. After witnessing the government response to the financial crisis in 2008 the blueprint became clear for the future. If there was ever trouble, governments would step in with additional debt which would be purchased by central banks with a printing press. Taking the logical next step through this process shows this will ultimately lead to a far greater crisis in the future.

This logical, easy to understand end game has been lost and forgotten with a surging stock market and falling precious metals prices. The charts now "prove" there is no danger ahead. The belief in paper currency, which has been astounding for me to watch over the past 8 years, has only grown. Instead of fearing potential devaluations or defaults in the most bankrupt parts of the world, investors have rushed to those areas to purchase bonds even as interest rates moved negative.

People initially forgot about gold and have now moved to loathing it. The daily sentiment index on gold and silver both reached 10% yesterday, meaning 90% of investors believe gold and silver will fall from here. Mainstream financial writers now confidently predict gold will continue its plunge lower, forever. From yesterday...

Market Watch: "Why Gold Is Falling and Won't Get Up Again"

That sentiment looks bullish, however, when you compare it to what is happening in the mining sector. The Philadelphia Gold and Silver Index below, which tracks a large basket of mining shares, has now moved to prices last seen in 2001 when gold was trading around $300 (gold is at about $1100 as I write this morning). 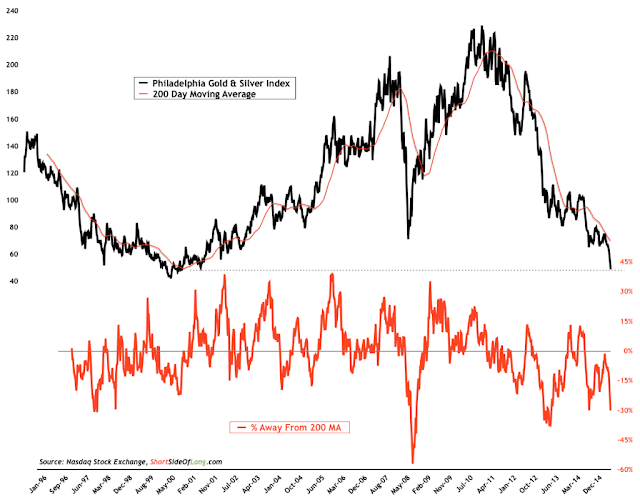 The GDX, which is the most widely tracked gold mining ETF, fell 11% in trading yesterday alone. I entered the market yesterday to begin buying the GDX when it was down 8% on the day, only to check back after the work day to see it had already dropped another 3%.

As I write this morning gold mining shares are perhaps more depressed than any asset class in history. Does that mean they have to stop falling from here? Of course not. The market believes gold will fall below $500 in the months and years ahead and stay there forever, which will make every mine on the planet unprofitable. That may happen. I do not believe it will, so I am currently purchasing mining shares (along with steady silver buying).

If mining shares and silver continue to plunge in price (and fundamentals behind the metals do not change) then I will accumulate more, at a greater pace and size. Maybe this time global debt and money printing will have a long term positive impact on the global economy, while every previous time in history they they have lead to slowing long term growth and/or a crisis. I am betting this time is not different.