History Shows The Fed Raising Rates Is Bearish For The U.S. Dollar

Market participants believe the Federal Reserve will increase interest rates at one of their remaining 2015 meetings, and many assume it will come in September. They also believe and are betting with their portfolios the rate increase will result in a continued move higher in the U.S. dollar index after the spectacular rally we saw from 80 up to 100 over the past year (see red line in chart below).

History shows the Federal Funds Rate does not correlate with U.S. dollar strength or weakness. Not only that, the last three times the Fed began increasing rates after an easing period the U.S. dollar index fell (see shaded areas below). The most notable period occurred in early 1990's when the Fed steadily increased rates from 3% to 6% and the U.S. dollar fell the entire time. 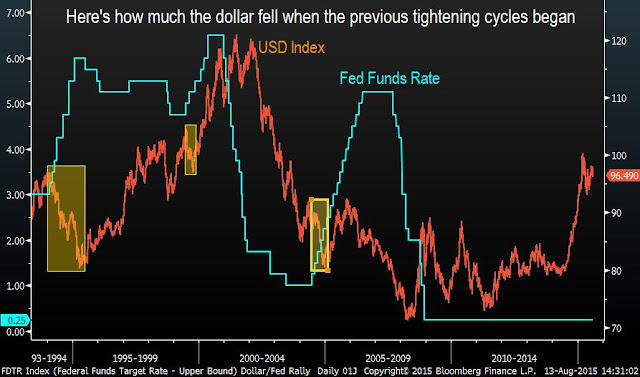 Does this mean this U.S. dollar will fall if the Fed raises rates this fall? No, it just means the act of tightening has no historical correlation on which way the index will move. The U.S. dollar index may very well continue its bullish march higher, similar to what occurred in the late 1990's after the initial brief decline (highlighted above).

I believe a rate increase by the Fed has been "priced in" with the massive move higher in the dollar over the last year. How the market will respond will be determined by what the Fed says comes next. There is a widespread bullish conviction the dollar will continue to move (much) higher from here. I like to take bets against those types of trades when I believe the underlying asset has long term fundamental flaws (the flaw being the United States is bankrupt backed by treasury I.O.U.'s which are backed by an electronic printing press).

There is also the outside possibility the Fed will not raise rates this fall. Should that occur, with every living person on the planet positioned and betting heavily on a rate hike (long the dollar), I believe you will see a significant decline in the dollar over the next 6 months as there will be a rush to unwind those bets.

I have already begun to move a portion of my U.S. dollar cash holdings into currencies that have been decimated, and I will continue to move more if the U.S. dollar strength continues.