Back in December last year every financial article and media outlet on the planet was reporting on the panic in the Russian financial markets. To summarize the situation:

- The currency was in free fall
- The stock market was plunging
- Bond yields were surging
- The central bank announced a surprise overnight rate hike of 6.5% to bring the benchmark interest rate to 17%! (To help put that in perspective, the U.S. markets are completely hysterical right now regarding the Fed raising rates to 0.25%)
- Citizens throughout Russia were spending the night pulling their money from ATMs (and buying U.S. dollars) in fear their money would be gone (or worthless) by the next day

Every once in a while (and it's very rare, trust me) I end up timing markets well. On December 16, which can probably be considered the absolute peak of Russian hysteria, there was one article on earth with an insane writer who was arguing why Russia represented a buying opportunity. You can read it here (hint; I am the writer):

About 10 months later the currency is about exactly where it was when I wrote the article (against the U.S. dollar). If you invested in a 3 year bond like I discussed in the article you are on track to make your 18% this year, and if you bought stocks you purchased into the best performing asset class on the planet in 2015. 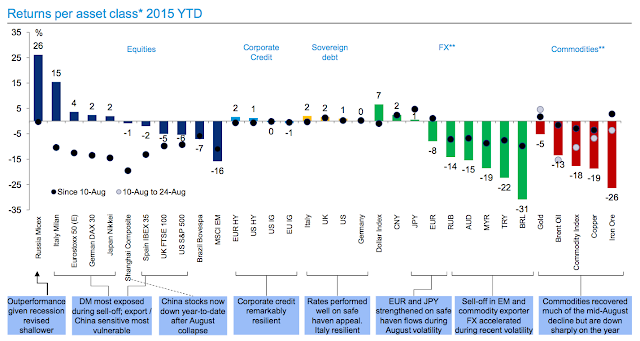 Why do I bring this up? Because I don't want you to call for medical help when I tell you the following:

Hopefully I don't have to paint the background picture for you on how terrible things are currently in Brazil. Every media outlet, television station, financial article and radio show are currently discussing why Brazil is about to enter a 200 year depression and the currency, stock market, real estate and Brazilian bonds are about to fall 90% from here.

Yes, they have a political crisis. Yes, their government income is falling as their obligations are rising. That's what happens when your economy goes into recession. Yes, inflation is running high. Yes, government bond yields are rising, stocks are crashing and the currency is in free fall. Yes, they (corporations and real estate developers) borrowed a ton of debt in U.S. dollars and a lot of that debt will default.

........By the way, as a quick side note, when someone borrowers a ton of money and they don't pay it back, who ends up getting hurting the most? The lender. Who is the lender? Mostly U.S. banks. Think about that for a moment because in the 6 million articles written on the sovereign debt problems I have not seen that mentioned once.......

Let's collect ourselves for a moment and take a deep breath, take a step back, just as we did with Russia. Let's look at the much bigger picture.

After the sovereign debt crisis in the late 1990's, emerging markets around the world began accumulating massive foreign exchange reserves (almost exclusively in dollars). As U.S. dollars poured into their countries due to their trade surpluses they recycled the dollars back into United States assets (treasuries, mortgage bonds, or cash).

Why did they do this? If there was another currency crisis like we experienced in the late 1990's they wanted to have ammunition ready to fight it. If their currency began to fall rapidly against the U.S. dollar they would have the ability to sell dollars in the open market and buy their local currency. Foreign exchange markets work just like stock markets. If a massive buyer enters the markets to make large purchases it will stop the price from falling or cause it reverse course and rise.

How large is Brazil's war chest? 368 billion dollars. This is the seventh largest reserve accumulation in the world. For the complete list click here.

Brazil's total debt to GDP, which includes corporations, citizens and their government, is only 128%. That makes them one of the most responsible borrowers on the planet relative to the size of their economy. The debt to GDP ratio for Brazil has risen since the chart was put together below (but so has every other country above them). 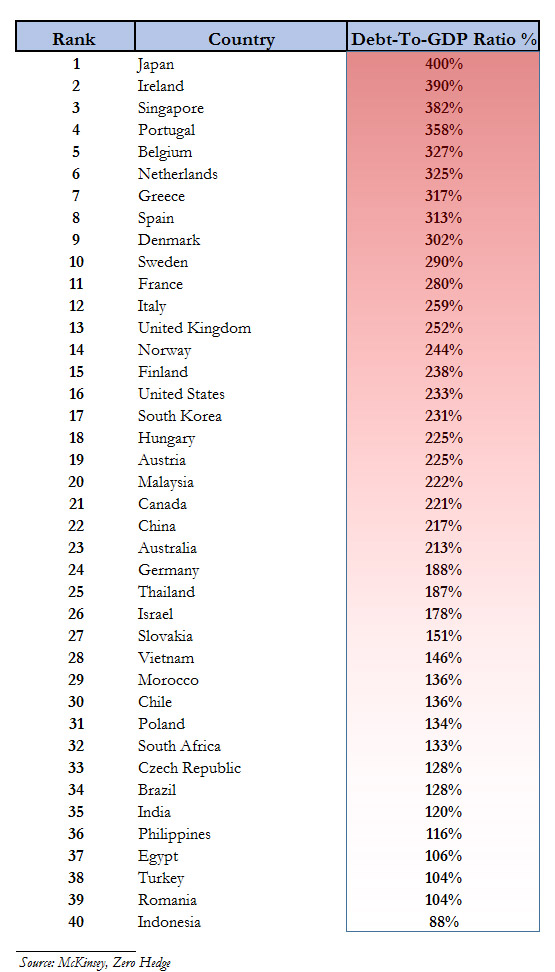 Stripping away their corporate and individual debt you can see their government debt to GDP is only 59% in 2015. To help put this in perspective, Greece did not enter crisis until they reached 130% debt to GDP, the U.S. is over 100%, and Japan sits at over 250% debt to GDP today!

Unlike Russia, I do not think the Brazilian stock market (in general) has fallen enough to make it a safe entry point (it's getting close), but I believe the currency and the bond market have. A three year government bond in Brazil currently pays a little over 15% annually.

What are the risks? The currency can continue to plunge (probably likely in the short term) and/or the government can default on their debt (I believe the latter is highly unlikely). If the currency continues to decline you are getting paid to wait. Is it likely the Brazilian real will be lower against the U.S. dollar tomorrow and perhaps even 6 months from now, but I believe it will be higher than the U.S. dollar in 3 years.

If you came down from Mars, landed on earth, and only had the data from two countries (the U.S. and Brazil), but you didn't know the names of the two countries, 100% of the martians would invest in Brazil.

As I mentioned when discussing Russia, the idea of investing in Brazil is considered insane by almost everyone on earth as I type this today. That is part of the main draw for me personally as an investor. I like to buy things when everyone hates them and they have strong long term fundamentals. Brazil will rebound eventually. Perhaps I am early, or very early, as a buyer (I almost always am), but the intoxicating fear around Brazil tough is enough for me to begin making purchases.