How Will China's Citizens Protect Themselves From Devaluation?

One of the common themes this year from some of the most intelligent money managers in the world is that China is going to need to devalue its currently, significantly, in the months ahead. The why behind the devaluation is beyond the scope of this discussion (see Kyle Bass - China's $34 Trillion Experiment Is Exploding). Let's instead try to imagine that you are a Chinese citizen and you think a devaluation will occur. How do you protect yourself? 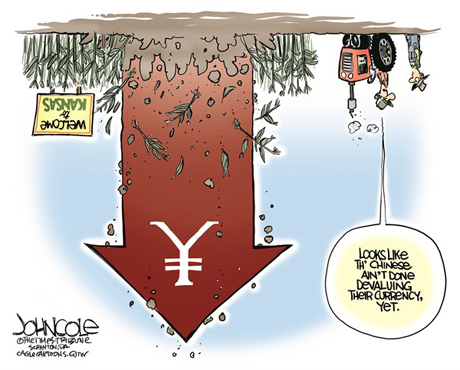 The most simple way to do so is by buying gold. U.S. citizens believe gold has been in a significant bear market over the past few years, and it has been, for U.S. citizens. The U.S. dollar has recently been the world's best performing currency and gold is one of the competing currencies in the global basket. However, while gold has fallen in value against dollar, priced in non U.S. dollar currencies it has exceeded or held close to all time record high prices. Is that confusing? Let's walk through some examples....

The Brazilian Real has fallen in value against the U.S. dollar over the past few years, but what if you were a citizen of Brazil and you decided to protect some of your portfolio by buying gold? The following chart shows gold priced in U.S. dollars (yellow line) the decline in value of the Brazilian Real against the dollar (black line) and gold priced in Brazilian Reals (blue line). You can see that if a Brazilian citizen diversified some of their net worth into gold they would have protected (and increased) their purchasing power. Brazilian stocks and bonds have been destroyed over the past few years making gold ownership that much more powerful.

Gold is not falling or rising over time. Gold is the constant. It is currencies around the world that are rising and falling in value and the devaluations are reflected in the price of gold within each specific currency. You can imagine gold as "sea level" while different ships (currencies) are taking turns sinking into the ocean. 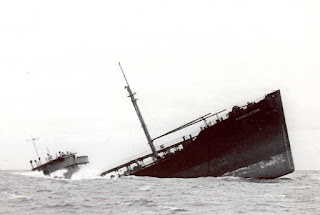 Here are a few other countries where gold is near or above its all time record high (all charts from Sharelynx). I note these specific currencies/countries because they are on my personal radar for investment. Some of the smaller/frontier countries have experienced an even larger rise in the price of gold.

A new entrant to the party has been the UK where talks have broken out regarding a move away from the European Union. The British pound has declined against the dollar, but unnoticed by (U.S.) mainstream press has been the surge in the pound priced in gold over the past three months:

As a Chinese citizen, holding a portion of your wealth in gold will clearly help protect you from a devaluation against the U.S. dollar. However, if you are a citizen with an extremely large net worth you may want to have a way to move some of your capital offshore.

Mark Hart, one of the hedge fund managers who correctly bet against subprime mortgages, believes there is a massive yuan devaluation coming (more than 50%). He believes Chinese citizens will utilize bitcoin as a way to bypass capital controls and move money outside of China's borders. While not particularly bullish on bitcoin over the long term, he believes there may be an unintended spike in price as this process occurs in the months or years ahead. Here is a brief comment in an interview with RealVision:


Another company called BitGold may provide an option for Chinese citizens. They would experience the best of both worlds using this strategy; moving money electronically priced in gold.

We know at some point the United States and perhaps the global economy will move back into recession (we could already be there). We know the Fed has already openly said when the economy slows they stand ready to re-initiate monetary programs (that did not work previously), only on a much larger in scale this time around.

At that point the U.S. dollar will join the rest of the currencies around the world in their long term secular decline against the price of gold. I have no idea how long the process will take or how long The Federal Reserve can keep its artificial aura of invincibility intact, but when it finally cracks we will experience the real crisis that has been building and growing under the surface since March 2009.