An excellent summary of negative interest rates from The Daily Reckoning:

"In Japan, for example… where almost two-thirds of government debt carries a negative yield… savers pay a bankrupt government for the privilege of lending it fictitious money.
It is a trifecta of absurdity: First, the money is phony. Second, the borrower is insolvent. Third, the interest rate is less than nothing.
And yet, this is not just some strange fluke or financial skullduggery. Central banks in Sweden, Denmark, Switzerland, the euro zone, and Japan – all of them presumably run by sober adults – have pushed their key lending rates into negative territory, too.
They’re doing this to drive bank lending rates into negative territory. Not only will bondholders pay to lend money to governments but also anyone with a bank deposit will be charged to save money.
And now, the Fed is considering following suit… and pushing its key rate into negative territory." 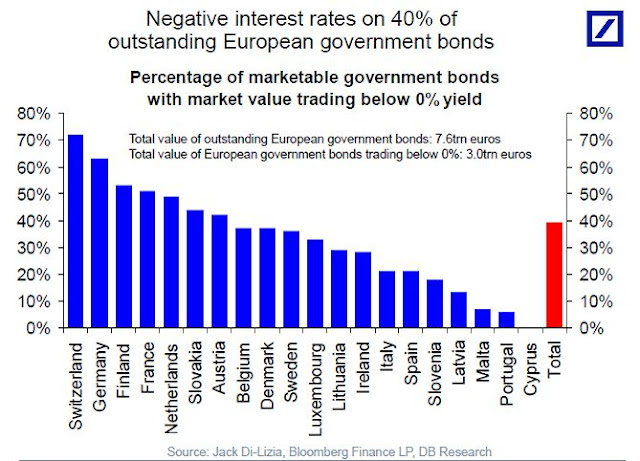 “No one will lend at a negative interest rate; potential creditors will simply choose to hold cash, which pays zero nominal interest.”
– Ben Bernanke, 2009
“I think negative rates are something the Fed will and probably should consider if the situation arises.”
– Ben Bernanke, December 2015