“What’s worrying is that stocks aren’t reacting to stimulus from the Bank of Japan and the European Central Bank,” said Tetsuo Seshimo, a portfolio manager at Saison Asset Management Co. in Tokyo who helps oversee $989 million. “Until recently, even if something bad happens, central banks could always rescue us with more easing. But as we’re not seeing that anymore, it may be a sign that authorities can’t keep pushing on that string. We have to consider the prospect that the current bear market will last a long time.”

- From Bloomberg this week

Central banks have pushed many real estate and stock markets around the world to extreme and in some cases bubble valuation levels with their actions since 2008, however, nothing comes close to the speculative mania that is taking place in bonds. I keep waiting for the moment we see the event that signals "peak insanity," but new events continue to unfold that push that date further into the future.

Last night the 10 year Japanese government bond went negative for the first time ever. Yes, this means investors now pay the government to hold their money for 10 years. 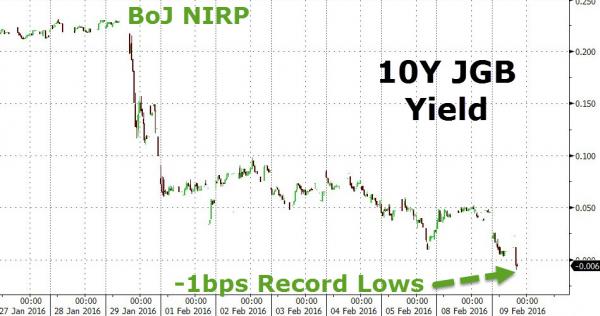 The following chart shows the Japanese 10 year yield's steady decline since 1995 when it was trading close to 5%.

Japanese stocks fell 5.4% last night and are now down almost 16% on the year. Bank stocks are down over 32% since January 1.

Watching these events take place in the Japanese markets should be a very important lesson for those in the United States that still believe the Federal Reserve has "unlimited" and "godlike" power over the U.S. financial markets. The Bank of Japan (Japan's central bank) recently announced they would move their benchmark interest rate negative to match the actions of the European Central Bank. This move would be paired with their current QE program which is gargantuan in size relative to their economy (and any QE program we have seen by any country, in history).

The chart below shows the size of the Bank of Japan's balance sheet relative to their GDP. Their balance sheet grows when they print money and purchase financial assets. To help put this in perspective, in order to match the size of Japan's current QE program the Federal Reserve would need to be purchasing at least $3 trillion in assets annually. 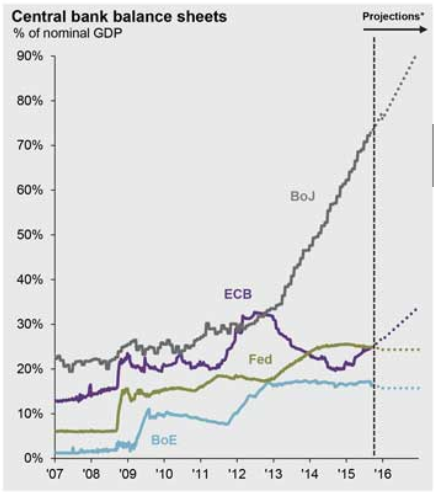 The Bank of Japan has said it will do "whatever it takes" to create inflation and push stock prices higher. Their promise, combined with unprecedented actions, has been shrugged off by the stock market year to date. It is important to note they are not just buying government bonds and mortgages as the Fed was during their QE programs; they are also directly purchasing corporate bonds and stocks.

There is widespread discussion that if markets continue to fall the Fed's next move will be to bring rates negative in combination with another massive round of QE. While we can be sure the long term damage of these programs will ultimately be catastrophic, it is just as important to know they may not automatically push stocks higher in the short term as investors believe.