The British Pound's 100 Year Of Debasement

The chart below provides a long term view of the British pound against the US dollar. It is remarkable it traded at 5 to 1 in the earlier part of the 20th century, and perhaps even more remarkable how far it has declined over the last 100 years. 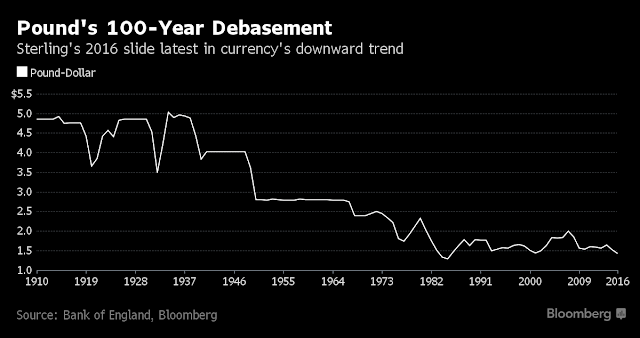 Where will the pound trade against the US dollar over the next five years? I have no idea, and I care little. Both developed countries suffer from a systemically dangerous and bloated banking system and overpriced real estate, stock and bond markets. Trying to figure out how the pound will trade against the dollar is like trying to figure out which broken and burning ship will sink into the sea faster.

Where do I believe the pound will trade against gold over the next five years? Much lower. That's where I'd rather focus my attention.