The bond bubble continues to shatter records weekly. No additional commentary needed regarding the chart below, other than to say when this supernova finally implodes the impact on financial assets will be like a meteor striking the earth. 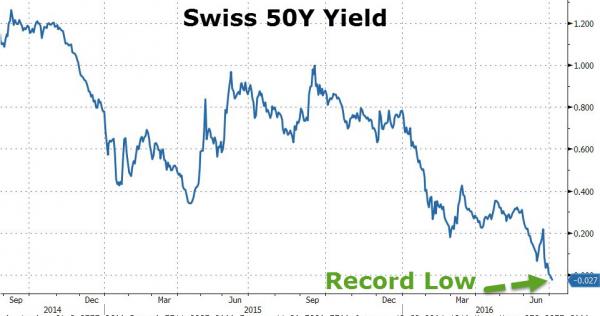 Some commentary worth noting from John Hussman's weekend article "Head of the Snake":


Following the British referendum to exit the European Union, the paper value of global assets briefly fell by about $3 trillion. This decline in the market capitalization immediately garnered headlines, suggesting that some destruction of “value” had occurred. No. The value of a security is embodied in the future stream of cash flows that will actually be delivered into the hands of investors over time. What occurred here was a paper loss. While the recent one was both shallow and temporary, get used to such headlines. In the U.S. alone I fully expect that $10 trillion of paper wealth will be erased from U.S. equity market capitalization over the completion of the current market cycle.

While any given holder can sell their securities here, somebody else has to buy those same securities. The fact that valuations are obscene doesn't mean that the economy has created more wealth. It just means that existing holders of stocks and long-term bonds have a temporary opportunity to obtain a wealth transfer from some unfortunate buyer. Whoever ends up holding that bag will likely earn total returns close to zero on their investment over the coming 10-12 year horizon, with profound interim losses on the way to zero returns.

Understand that securities are not net economic wealth. They are a claim of one party in the economy - by virtue of past saving - on the future output produced by others. Fundamentally, it's the act of value-added production that ‘injects’ purchasing power into the economy (as well as the objects available to be purchased), because by that action the economy has goods and services that did not exist previously with the same value. True wealth is embodied in the capacity to produce (productive capital, stored resources, infrastructure, knowledge), and net income is created when that capacity is expressed in productive activity that adds value that didn't exist before.

New securities are created in the economy each time some amount of purchasing power is transferred to others, rather than consuming it. Once issued, all of these pieces of paper can vary in price later, so the saving that someone did in a prior period, embodied in the form of some paper security, may be worth more or less consumption in the current period than it was initially. That’s really the main effect QE has - to encourage yield-seeking speculation that drives up the prices of risky securities, but without having any material effect on the real economy or the underlying cash flows that those securities will deliver over time.

For more see: The Stock Market "Always" Bounces Back, Right?